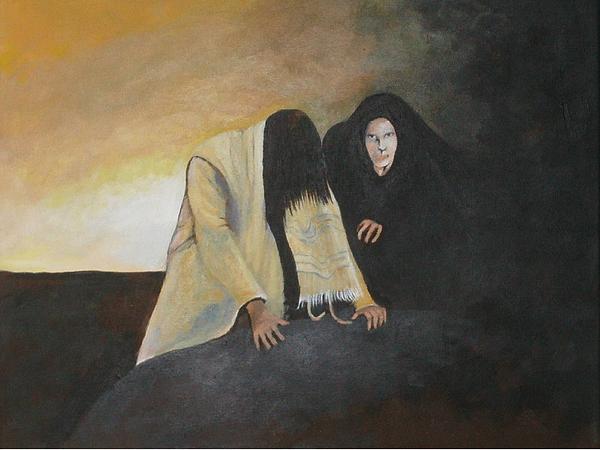 To be human is to experience temptation, and in Luke’s narrative – as the final event before his public ministry begins – Jesus is put to the test.

If you need further proof that Jesus is fully human here it is – like you and me – Jesus was tempted, he could not escape that side of life. And don’t think for a moment this was his only experience of temptation. I am sure like you and I temptation was before him at all times. Hebrews 2:18 tells us he was tempted in every way.

If you want proof that you can overcome temptation again look no further – by defying temptation and overcoming it Jesus gives us hope that we can be set free from the temptations that so often entangle.

In Luke 3 we have been told of Jesus’ baptism and how while he was praying the Holy Spirit descended upon him in bodily form like a dove. Note a constant theme that Luke brings out: prayer opens the way to encounters with God.

And there was a voice from heaven:

You are my Son, the Beloved; with you I am well pleased.

Don’t we all long to hear similar words: This is my daughter, this is my son, whom I love and am very pleased with.

Jesus had the pleasure to hear the voice of God, his father, speaking such wonderful words of love to him.

Yet from that high and holy experience of blessing at the Jordan, Jesus was led into the back country, the remote and lonely wilderness.

This is where we begin to compare the two stories that we have heard today.  For just as the first Adam met the tempter so did Jesus, the last Adam(1 Cor 15.45).

Adam and Eve had also received words of love and blessing from God.  Then they met the serpent — the tempter.  They met him in a garden of plenty — their bellies full, they had everything, need of nothing.

Jesus had nothing, he was in a wilderness, alone and hungry.  He fasted for 40 days — during which he was constantly tempted.

In contrast Jesus had no-one to support him; no resources at hand. Except that is something that is available to each one of us; the blessing of his father, the Word of God — Scripture, and the Spirit of God leading him on, urging him on.

The voice that Eve heard and that Jesus heard were similar — inspired by the same Devil — the voice of temptation.

The first temptation undermines the love and the will of God.   Note: IF you are the Son of God, tell these stones to become bread.

The voice of doubt, undermining, sowing seeds of discontent.  These words also imply

“God says he loves you — then why doesn’t he feed you.

Why does he make you go through all this suffering.

Does he really love you.”

I am aware that many of us have a voice running in our head repeating similar words of self-destruction.

If God really loved me then I wouldn’t be suffering the way I am. …

Was the devil trying to set this type of internal dialogue in Jesus’ head?  He does it to you and me all the time.

Of course, we know that Jesus didn’t fall for it.  Instead he turned to Scripture (Deuteronomy 8.3) and replied (v4)  “It is written, ‘One does not live by bread alone, but by every word that comes from the mouth of God.’  ”

Jesus is not above the human need for food but on this occasion he is wise enough to know that he has a greater need.

Satan does not give up.  He offers Jesus a shortcut to glory.  Satan says bow down and worship me, just once will do, and I will give you all these kingdoms of the world, you will have authority and glory.

Sounds almost too good to be true because it is.  The easy road, apparently short effortless route to a goal, often tempts us.  However, the glory for which Jesus was destined was on the other side of pain and suffering, there could be no short cut.

Especially no shortcut that involved worshipping the creature instead of God, the creator.

Jesus rejects Satan again and commands him to depart: Jesus said to him, “Away with you, Satan! for it is written, ‘Worship the Lord your God, and serve only him.’ ”

Finally desperate the devil takes Jesus up to the highest point of the temple where he attempts to play Jesus at his own game.  He quotes Scripture.

For he will command his angels concerning you to guard you.  On their hands they will bear you up, so that you will not dash your foot against a stone.

Confidently Jesus answers and reminds Satan that it is written again: “Do not put the Lord your God to the test.” (Dt 6.16)

Sometimes the voices that would urge us on are very good at quoting the Bible …  but they are not so good at getting the context right.

By selecting particular portions of Scripture, we can make the Bible say almost anything we want.  There is nothing wrong with quoting individual Scriptures as long as we bear in mind the context and the whole message of the bible.

We must test what is being said, discern the truth of the message.

Paul tells us to test everything and hold on to what is good.

Even what is said in the context of this service should not be taken on board without careful consideration.  We must test everything we hear, and reject all that is incorrect, misleading or  evil.

In each of these cases Jesus clearly heard what he was been urged to do.  Nevertheless, in each case he discerns the error in the voice and replaced it with the voice of truth.

By contrast Eve and Adam.  We know their story only too well — possibly because we find ourselves caught up by the same deceptions.

The wily serpent played a similar game with her.  However, in her case she listened and failed to discern the error.  The serpent, urged her to eat of the fruit of the “tree of the knowledge of good and evil”.

He sucked her in by a series of carefully crafted half-truths, lies.  Eve fell for it, and so did Adam.

Jesus, the last Adam didn’t, thus opening the door to our salvation.  Jesus was able to discern the voice of evil and by speaking the truth reject it.  Eve by contrast fell for it.

The result of these episodes are well known.

Adam and Eve urged on by evil came to recognise their shame, they tried to hide their nakedness from each other and they even hid from God.

We read in Gen 3.8 that one day Adam and Eve heard God coming, they heard the voice of God calling to them: but they were too afraid to show themselves.  The relationship they had had with their creator was gone forever, intimacy lost. This is the result of sin.

Jesus on the other hand defeated Satan who was forced to flee – maybe he had taught this truth to his brother James because years later James would write:

Submit yourselves, then, to God. Resist the devil, and he will flee from you. (James 4:7)

Jesus submitted to God, resisted the devil, and the devil fled – defeated! and in his place, as Matthew tells us God sent his angels to minister to Jesus. (Mt 4)  Intimacy restored.

There are many many voices leading us on, urging us on, but only a few of those voices are true, as we heard last week it is to Jesus that we must listen.

Maybe you’re in the wilderness also – and the voices are calling out to you.

In the midst of it STOP – and tell God you are listening; choose to listen.

So that in time we too may hear those words of God addressed to us:

“You are my Son, my daughter, you are Beloved; with you I am well pleased.”

Currently, in response to COVID-19 our regular church services are not being held. Also now that the government has announced a Level 4 alert our buildings are closed.

Office staff and ministers are working from home.

at the St John’s Room

every 2nd Sunday of the month