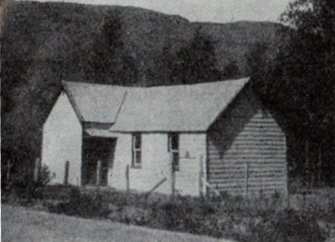 The old Frankton Church photographed around 1930 by Alexander Don 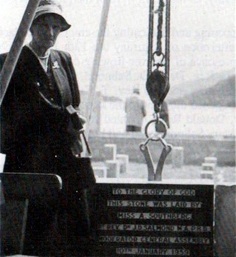 Miss A. Southberg laying the Foundation Stone of the new church on 10 January 1959 (photo M. Roy)

Owing to delays and disputes about the survey and sale of land in the Queenstown block between the Government and Mr Rees, a township was surveyed at Frankton and some people were induced to move from Queenstown to the new town. The courthouse was actually moved from Queenstown to Frankton and re-erected on the bank of the Kawarau River overlooking the Falls. In July 1863, all the other Government buildings followed the courthouse. However, in the same month, Vincent Pyke, the Goldfields secretary, came in state to the Wakatipu, apologies were made and Queenstown was again appointed the centre for court sittings. As a result of this confusion the courthouse, instead of being carted back to its original site, was sold to the Presbyterians, whose leader at the time was James Flint. 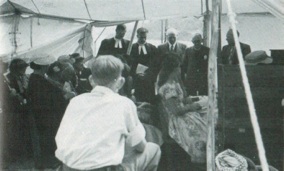 This building of wood and iron thus became a place of worship with seating for sixty people. It was considerably enlarged during the mid-seventies. It is likely that services were held in the courthouse before it was bought for church purposes. One of the earliest records of the Frankton Church is a pulpit Bible bearing the following inscription: “Presented by the ladies of the congregation to the Frankton Presbyterian Church, 27 October 1868.”

After doing duty for over 80 years the old church was, in 1959, replaced by a new structure, the erection of which had been greatly assisted through a bequest of £500 by Mr Peter Reid, of “Glenpanel,” a well-known farmer of the district who died in 1936. He was the son of Mr James Reid, an Arrowtown elder. The Petrov organ in the church was given by the Reid family and the communion plates by Mr G.H. Wardell, a farmer of Quaker lineage who was a faithful elder of the congregation for several years. The foundation stone of the new church was laid on 10 January 1959, by Miss A. Southberg, the oldest member of the church and at the opening ceremony a tablet in memory of the Rev. Donald Ross, given by Mr Eric Skinner, of Dunedin, was unveiled by Miss Mary Salmond, who was baptised by Mr Ross in 1887. 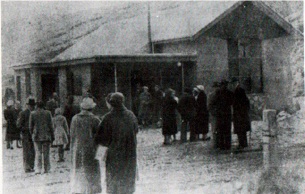 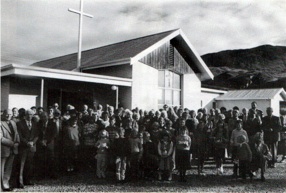 The congregation after the 1989 church opening (photo B.A.S. Wilson) 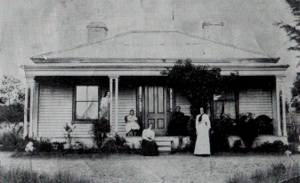 The first manse photographed around 1890 by Roger Sewhoy

The Haunted Frankton Manse
The first manse of the Wakatipu parish was located at Frankton. Plans for a new manse were approved a month after the arrival of the Rev. Donald Ross, but the contract was not let until twelve months later. In the early years of its life this manse was reputed to be haunted. In Alexander Don’s “Memories of the Golden Road” the following account is given of the “haunted manse.”

“The first Presbyterian manse in the Wakatipu was at Frankton. After a time of mysterious noises were heard at intervals, generally late at night, and the rumour went round that the house was haunted. One warm night Mr and Mrs Ross had retired, leaving a window wide open and a light burning when, about 11 pm, they were startled by a naked man jumping through the window into the room. It turned out that he was a mental patient, but Mrs Ross suffered such a shock that the minister temporarily vacated the manse and took his wife to Queenstown. To settle the ghost question, one Dick Roberts, a rough-looking woodcutter owning an equally rough-looking dog, undertook to live in the manse and put a stop to the business. On the night of his arrival he sat reading, with his gun across his knees, when a queer tapping was heard. He made a search, but found nothing unusual; again the tapping and another inspection. When the noises came a third time, the dog set up a mournful howl. The ghost-hunter fired off both barrels into space and he and the hound departed at a round trot for their usual abiding place.

“It later transpired that an attendant at the hospital had got married, and as there was no accommodation there for married couples, he was required to get a house or lose his job. The manse, being comparatively near and a new house, he set about emptying it and this he did by setting up a tick-tack, a metal disc on a black thread, which the ‘ghost’ in concealment could manipulate to produce the tapping, remaining still, if any of the inmates should venture out. In this manner the ‘ghost’ actually became a tenant of the manse.” In 1878, the manse was sold to the Southberg family and a new manse was built in Queenstown. The old manse, much altered in later years, was shifted to a close-by section in 1981.