Paul and Silas are going to a place of prayer and meet a woman. This woman is a no-name slave girl, no power, no status, no freedom: doubly enslaved: to her human master and to a spirit that bound her in fear.

At first reading I am confused by Paul’s reaction – this woman is after all speaking the truth, at least close to it; she provides free advertising for Paul.

But, clearly Paul is not pleased, after a few days of her following them he cannot take it any more. Even the truth, when proclaimed through evil systems, ends up distorted.

Or is it simply the fact that her declaration fell short of the truth.

It seems that evil’s attempt to manipulate and perhaps control the truth are not to be tolerated, but answered with the clarity of the gospel.

And so, in Jesus’ name, Paul sets the woman free from the spirit that had occupied her life.

I wonder what happened to her. It would be good to know. But the focus of the story is not the woman, the focus is the power of Jesus over all that is evil and corrupt, the power to set free.

She was imprisoned and then in Jesus name she was free.

At first I was surprised by the lack of jubilation; no wonder or awe at the power of God instead the only reaction from those looking on is anger.  Her owners are outraged – their income has just taken a hit and they want revenge.

Thus Paul and Silas are dragged before the authorities and lacking any real charge the owners incite racial bigotry: it’s all too easy to label them; they are Jews in a Roman world; they are different therefore in some undefined way they become a target for exclusion, labelling, repression, violence. Roman’s prided themselves on justice – a fair trial and all that. But there is little that is fair about this trial.

Today we do the same to immigrants who take “our” jobs, who cause all the road mayhem, who don’t know how to bring up their children, who have strange, to be feared beliefs.

Immigrants have always been an easy target of bigotry. It’s just easy to blame the other for our problems.

Tragically there’s an even deeper issue here – the owners, the onlookers, the authorities all fail to recognise God at work in their midst – God calling them out of their own bondage.

But I guess we understand that ourselves – it is hard to see God at work when it is our plans or our profits at stake.

Even as Church that is our constant challenge – to be aware and ready to accept the fresh moves that God makes in our midst.

On that day in Philippi the people were blind to God, on that day evil won and Paul and Silas now found themselves to be the imprisoned ones.

Yet despite appearances we soon realise that something’s cannot be imprisoned: Paul and Silas in that dark cell pray and sing praises to God.

They may be under lock and key yet their spirits are free.

While there may not be physical bars many of us are imprisoned just as surely – no – more securely than if we were in Mt Eden.

Our attitudes and beliefs about ourselves, mistakes that we can’t forgive ourselves for, sometimes even spiritual powers and addictions imprison us and rob us of the life of glory given us by Jesus (John 17:22).

Yet from this incident in Acts surely we see that in Christ there is no need to stay imprisoned – Christ has victory over all that imprisons.

Many are imprisoned in this story.

The slave girl, her owners – their greed blinds them, imprisons them to all else, the prison guard (note his fear).

But let’s stay with Paul and Silas for a moment.

In prison we see their hearts. Hearts tuned to God. When in despair how we react says a lot about us – what comes from your mouth at times like this? And how do you treat those who mistreat you?

Beaten, bloodied, locked away Paul and Silas turn to God. They pray – they sing – and the prison falls silent as the other prisoners stop their cursing to listen. Such was their hope in God that their eyes were lifted from their present situation to their eternal destiny. They were secure in God’s love.

We all live by a set of unwritten – often – unconscious values – often these have little obvious impact until the hard times comes. It’s then that we discover if we live by something of substance or not. What gives you strength when the sun does not shine? What comes from your inner-being, through the pain?

I don’t know what you’re going through, but I do know from my own experience that it’s not easy to have the attitude of Paul but as we draw of the Holy Spirit we do learn to trust God in all things, to pray and praise God even in the midst of the darkest night, for we know that is not our destiny. 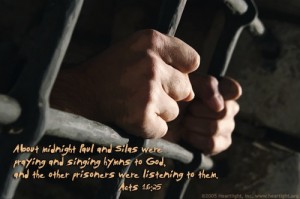 When the earthquake hit’s they are still singing – God has already sprung preachers from Roman prisons twice in Acts (5:17-21, 12:6-11), so we readers should not be surprised that the Philippian jail can’t hold Paul and Silas.

Yet earthquakes are still a surprising instrument of freedom when you think about it. They are better known for destruction, trapping, crushing but here God uses this one for liberation.

The locks are broken, shackles unlocked and everyone was free.

The gaoler waking in fear rushes in to check on the inmates and we imagine his heart sinking as his worst fears are realized. He was responsible for keeping the prisoners secure – these were harsh times and he knew that with the prisoners gone so was his life.

With no hope he pulls his own sword on himself and prepares to die.

And here again the character of these disciples comes through. They could have escaped – nothing stopping them, they could have walked away and allowed their guard to kill himself. But this is an escape story without an escape. Paul and Silas don’t leave. Being God’s servants does not mean escape from the dangerous places, but means the opportunity to be the voice and the hands of Christ there.  They know that physical freedom is meaningless when there’s a man before them who also needs to be set free.

And so just as Paul and Silas shared the gospel in song with their fellow prisoners now they save their jailer both from the suicide that Roman honour expected with a failure of duty (see 12:19), and from a life without faith in Christ.

They are then asks the question we should all know the answer to.

What must I do to be saved?

We can speculate what was meant by this question but I prefer to take it at face value. The gaoler knew why these men were in prison; he knew what the slave girl had being saying about them “These men are servants of the Most High God, who are telling you the way to be saved.”

He had also witnessed their manner, and their faith, he knew that these men had something he needed: so maybe the question isn’t so surprising: “What must I do to be saved?”

The answer is clear: “Believe in the Lord Jesus, and you will be saved, you and your household.”

The jailer hears the gospel, receives the gospel and in response cares for Paul and Silas – washing their wounds – and is baptised, he along with his entire household.

When I was a child I simply assumed that God had arranged the earthquake to free Paul and Silas – but that’s not the reason at all. Indeed why the earthquake happened may be that it was simply due – but what I celebrate here is how God used that experience to reach the heart of one man and through that one man, his family. Maybe we’re thinking this particular man was undeserving – we’d be right, this is an unlikely candidate for salvation.

But that’s one of the greatest lessons of the gospel of Jesus. God reaches out to all people, irrespective of class, education, race, gender, or seeming goodness. God desires to set all people free.

In John’s gospel Jesus prayed for all who would believe, praying that we all – despite our differences, despite our tendency to separate – would be one. And that’s not simply one with each other – but united with our creator. We are to be in Christ and Christ in us.

At a later time Paul would write in Galatians 3:28 – “There is neither Jew nor Greek, slave nor free, male nor female, for you are all one in Christ Jesus.”

God has no favourites – You too are a candidate for God’s love – you too are known by your God, God knows your troubles and what entraps you and desires to set you free.

The story is not quite over.

The next morning, the city magistrates want to be done with this episode quickly, all they want now is this trouble to be over.

Somehow they think they are still in control – sadly they still don’t see God at work. All they want is things back the way they were before these troublemakers turned up.

But they are in for a surprise. Paul now reveals that he and Silas are citizens of Rome; legally this is their trump card.

When played the magistrates fall over themselves in their hast to appease their former captives.

In their own time Paul and Silas do leave town. God no doubt is calling them elsewhere.

But before they go a final stop at the home of Lydia (verse 40).

We are reminded as they leave that the gospel stays. Their work is done. The church remains to serve and proclaim the freedom of the risen Christ.

Their world forever changed, to the glory of God’s name.

Currently, in response to COVID-19 our regular church services are not being held. Also now that the government has announced a Level 4 alert our buildings are closed.

Office staff and ministers are working from home.

at the St John’s Room

every 2nd Sunday of the month