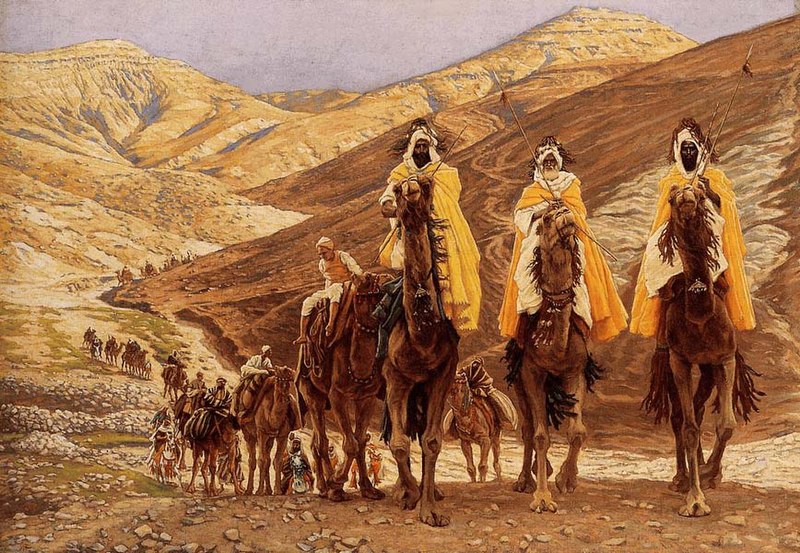 Matthew the gospel writer tells a story we know automatically as the Three Wise Men – mind you nowhere does Matthew actually tell us how many there were, we are simply told that Magi or Wise Men came from the east.

They came following a light to find the light.

And that’s what this story is about: it is the story of the light shining in the darkness.

As Matthew tells the story there is a foreboding in the air – the Magi sense it and don’t trust Herod, and as events would soon show they were right in their caution because it was not long before a furious Herod attempted to destroy Jesus, and he left little to chance – his orders were explicit and brutal, as he demanded the death of all little boys in and near Bethlehem two years old and younger.

The coming of Jesus provoked strong reaction: to desperate violence on the one hand; to adoring worship on the other.

These men from the east, travel so far, simply because they seek the light in a dark world.

From the beginning Jesus’ world is dark and dangerous:

Mary – hardly more than a girl becomes pregnant, disgrace, scorn, accusations, followed by stoning is what she must have expected. Joseph too invites disgrace, and possibly more, by choosing to stand with her. And LIGHT shines in the darkness.

Yet more danger is to come.

The times are dangerous, especially for anyone seen to be the slightest threat to King Herod, a non-Jew Roman appointee, he was ruthless. His murders included a wife, 3 sons, mother-in-law, brother-in-law, uncle and many others, including an unknown number of boy babies of Bethlehem (v16).

So when these foreigners come knocking at his door asking the King where the new-born king may be found Jesus is in even greater danger.

Herod says he too wants to worship the new king – but if you believe that you’d believe Tui ads. Herod’s only interest as it soon becomes clear is elimination of all competition.

The Wise men understood the light, Herod feared it, and determined to snuff it out.

Jesus’ life was saved at this point only because Joseph listened to his dreams and led his small family as refugees to Egypt.

Dark times in which to be born, yet exactly the right time, for the world then and now surely needs God’s light.

It’s into this dark place that the Magi come and in a sense their coming reveals the light that is there, a light revealed in Jesus.

I love the way Matthew tells the story and places so much emphasis on foreigners.

By the time they arrive Jesus had been born for some time. How long we don’t know, some traditions say up to 2 years previously, I doubt that but whatever the answer this was not the night of his birth.

Jesus had been born for some time and no one seems to have noticed. Yes I know Luke mentions shepherds singing praises, and old Simeon and Anna, getting quite excited in the temple but that’s it, and Matthew does not even mention them.

Jesus, Emmanuel – God with us, the King of the Jews, the Light of the World is born and it does not make the news.

No one in authority had any inkling; the Magi’s quest was news to Herod.

Who were these men?

Well given the expensive gifts they carried we can assume they were wealthy.

Matthew says they were Magi, scholars who studied the stars, priests of the Medes, most of whom were based in Persia.

So it’s likely that’s where they came from. This is no casual trip; it is also a dangerous trip. Even today it takes planning and considerable expense; in Jesus’ day it would have been far harder.

At best I guess it would have taken a month, throw in preparation and planning and months could go by.

All the while their eyes upon a star.

Given their wisdom and their planning I find it strange that they went to the wrong place first, but I guess if you are looking for a king you would assume a palace, maybe for a bit they took their eyes off the light and made some almost fatal assumptions.

They did what we all tend to do – they looked in the places that made sense to them, and they looked for a king who fulfilled their expectations.

Jesus defies common sense and defies human expectation – he did it time and again with the disciples and the people who came to hear him, he does it to the wise men, and to us whenever we shape Jesus by our standards and desires.

What happens in the gospel of Matthew is that the first people – apart from Mary and Joseph – to come and worship the new-born king, are outsiders in more ways than one.

Thankfully the Magi did not give up at the first hurdle and when they eventually found Jesus they ‘saw’, they ‘bowed down’ – humbled themselves, and they worshipped. It’s like they could not help it. They had not bowed to Herod, and he was a full-grown King, but now before this child it is their most natural response – nothing else seems appropriate.

Remember these are not Jews; they were gentiles, of little account. They come from the east from where not much good is expected.

But they came, they saw, they responded.

It seems that they realized who this child was.

They have made the most amazing journey to find not just a king, but a God: and that surely is wisdom.

We are reminded that the gospel is for all people. God is determined to bless all people; that was always Gods intent and is seen here with the truth being revealed to these foreign wise men.

So God draws men and women from the north and south, east and west and invites all to see, to bow down and to worship.

Here in the Wakatipu this is especially obvious as we look around our streets and congregation: we are increasingly a global village and our church a church of the global village.

Back to the story for a moment: they saw, they bowed, they worshipped then they served.

In response to what they had seen and now knew they offered Jesus these most amazing gifts.

Gifts that must have seemed so out of place in a humble dwelling: gold, frankincense and myrrh.

What do we make of these gifts?

As noted already they are valuable – these gifts have been thought about and they have cost the Magi considerably.

They are gifts fit for a king, a priest, a suffering servant:

Frankincense not so obvious. It’s an aromatic gum resin obtained from the Boswellia family of trees which grow in the Arabian Peninsula or North eastern African, Somalia for example.

Frankincense was used primarily as incense and perfume, and was used to anoint priests. Giving it to Jesus points to his priestly role as our High Priest.

And Myrrh – also a sap. It has a bitter taste hence its name which is derived from the Hebrew “murr” or “Maror” which means bitter. It could be used with frankincense to anoint a priest but because it has excellent preservative qualities it was used to anoint the dead.

Could it be that these wise men have a hint of the suffering servant role that was to fall upon Jesus – they are certainly pointing that direction.

Gifts that are fit for one king: the priestly, suffering, king, the crucified one.

They come, they see, they worship, they serve and just like that they go.

Their coming and their acknowledging of Jesus shines a light that helps us now see Jesus truly: in the midst of darkness and challenge the light does shine.

They came as wise men and left wiser.

For they had discovered the source of true wisdom – God, Emmanuel, God with us.

Like them we too search for wisdom, like them we often end up looking in the wrong place but their story reminds us that wisdom is to be found: not in knowledge, not in books, but true wisdom is found when we bow and worship our God.

And then from that place of worship serve Him.

The wise men invite us to see Jesus

To bow before Jesus

To worship and serve Jesus

The wise seek him – are you?

Sunday worship : You are welcome to join us.

10am – St Margaret’s – Ross St. Frankton, across the road from the airport (lake end)

10am – St John’s – cnr Durham and Berkshire Streets, behind the massive trees.

Kingston: at the Kingston Golf Club: 1030am Sunday 31st January.