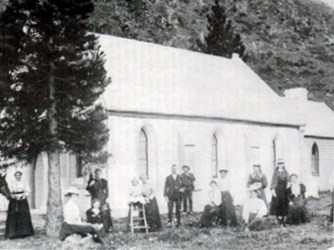 The history of the Arrowtown congregation is a very full one, for it has passed through six separate phases–from 1867 to 1901 association with Wakatipu Parish; 1901 to 1907 Aided Parish; 1907 to 1928 Self Sustaining Parish; The parish was transferred from the Presbytery of Southland to the Presbytery of Central Otago in 1929; 1928 to 1940 Home Mission Station; 1940 to 1986 association with Cromwell; 1986 independent ‘two thirds’ Parish and, finally, re-amalgamation with the Wakatipu Parish.

The Arrowtown Church was opened for worship on 6 July 1873. For a number of years, according to Alexander Don, Arrow Presbyterians observed 17 July as the anniversary of the opening of their church. The actual opening date was disputed until a diary entry by Reverend Strobo was found in 1910 that confirmed the opening date as 6 July. It reads: “1873. 6 July. Preached at Arrowtown for Mr Ross and opened a new church. Mr Bethune preached for me.”

When J.D. Salmond wrote his book The Citadel at the Gate: The Story of St John’s Presbyterian Church, Arrowtown in the late 1960s, he described St John’s as “this fine stone building with its outbuildings, stable, loose-box, chaff and harness room, [that] stands like a citadel at the gate of Arrowtown. It is a reminder of the days of the horse and the stonemason.”

In 1959, the old Miller’s Flat church, which had already been moved once in 1950 to become the Speargrass Flat Church, was gifted to the Arrowtown parish. It was subsequently shifted to Arrowtown to become a hall attached to the St John’s vestry. The Miller’s Flat Church remained attached to St John’s until June 2010, when it was again moved, this time to the Arrowtown historic precinct.

When Arrowtown became a separate parish in 1901, it became necessary to provide a manse, particularly in view of the first minister’s large family. This was done by purchasing the homestead of a neighbouring station, a 10-roomed dwelling with a glebe of five acres on which were growing many fine trees. 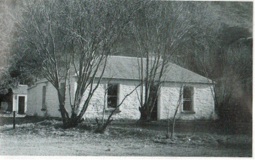 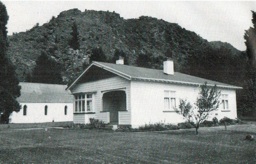 The first and second Arrowtown manses, both photographed in 1989

During the ministry of the Rev. Walter Humble it became necessary to provide a new manse. The old manse had been allowed to sink into disrepair and had become a trial to ministers’ wives. Thanks to the nucleus of a fund left by the Ross family, together with special collections and a Synod grant, a new manse, built on a site alongside the church, was opened and dedicated on 5 August 1935.

The above text consists of excerpts from J.D. Salmond, The Citadel at the Gate: The Story of St. John’s Presbyterian Church, Arrowtown (Dunedin: Otago Daily Times) and from D.G. & J.S. Jardine, Mountain Parish: 1867-1990 (Mosgiel: S.N. Brown and Taieri Print, 1990).